It has been a great ten days and we just returned form a great trip to Yosemite and my home town by the sea San Clemente. We loged almost two thousand miles on our precious Element but it was worth every mile.

We headed to Yosemite after Magellan (wife) had finished teaching the for the day. It was Thursday before Good Friday and the weather was not what we would have liked it to be. It had been raining most of the day and previous days. We were expecting snow for the Easter weekend in Yosemite. So I had to pack the snow chains and snow shoes, along with some like rain and winter gear. Just in case the weather wasn’t going to be as bad as we thought we decided to load the bikes. Bikes are a great way to get around on the Yosemite Valley floor. 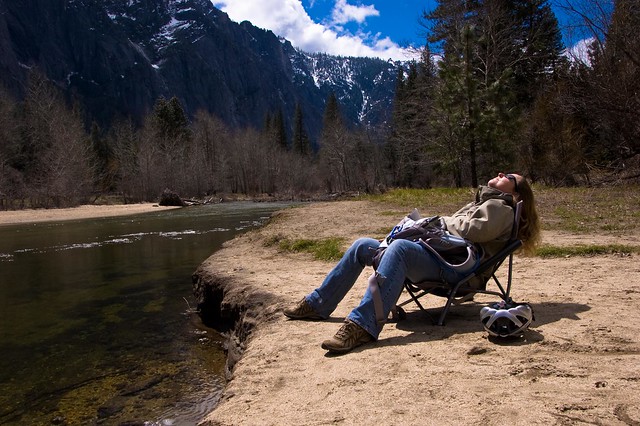 Yosemite was crowded, but not as crowded as I thought it would be. If you have ever been in Yosemite in the summer you know what I mean. Magellan calls it Disneyland of the Sierras. The weather cooperated and it didn’t turn out as bad as predicted. We hiked and rode bike to most of the places we wanted to go. However, there was plenty of snow at the higher elevations.

I was hoping for the blooming of wildflowers and the Pacific Dogwoods. Neither of these were blooming. We were just a bit too early for this. At lower elevations we saw lots of wildflowers blooming but none to photograph in the valley.

The main reason for this trip to Yosemite was for the full moon. The actual Full Moon was Thursday night. According to the University of Texas website the month of April, 2009 was going to be the best moon position to shoot a “Lunar Rainbow” in Yosemite at the Yosemite Falls. Because of the rain and the rain clouds Thursday night was a complete bust. You couldn’t even tell if the moon was in the sky.

The next night April 10th, showed some good possibilities. It cleared during the day and it looked like it was going to be a nice clear, but cold night. Nope at about 8 PM the clouds moved in and it obscured the moon. So I tried again for Saturday night and it was a little clearer, but it ended up being a bust too.

That is what happens we you go to the High Sierras in April you get late spring storms that obscure the moon. There is always next month and if that doesn’t work out their is always June. Last year I went to Yosemite in June. Drove up for one night and it was the night after full moon. It was my first time shooting a “Moonbow” or “Lunar Rainbow” and it was awesome.

On Easter Sunday we took our time on the return drive back to the Bay Area. We drove the Highway 120 west. We made several stops to take photographs. We stopped in the snow at Tuolumne Grove. We also stopped several time to take wildflower photographs on the side of the highway.

Once we got back to the house I had to reconfigure the Element for the beach. This included taking the bikes and bike rack off the Element and installing the roof rack for my surfboards. The racks for this trip will support two twelve foot Stand Up Paddle Boards, my 9’6″ longboard and my 7’6″ shortboard. Believe it or not that’s not my entire quiver of boards.

For those that might not really know me I grew up on the beach in Southern California and I live to surf. When I married, my bride gave me two wedding rings. One to wear everyday, and the other to wear while surfing. The surfing ring is titanium and is inscribed beautifully with the words “My Wife Lets Me Surf”. Magellan has a brother that surfs and understand that surfing is not just a sport, it a disease, illness or way of life.

We loaded and secured the car for the early Monday morning drive to San Clemente. We left really early to beat the central valley heat and to avoid traffic in the Los Angeles area, Yuck!

This site uses Akismet to reduce spam. Learn how your comment data is processed.